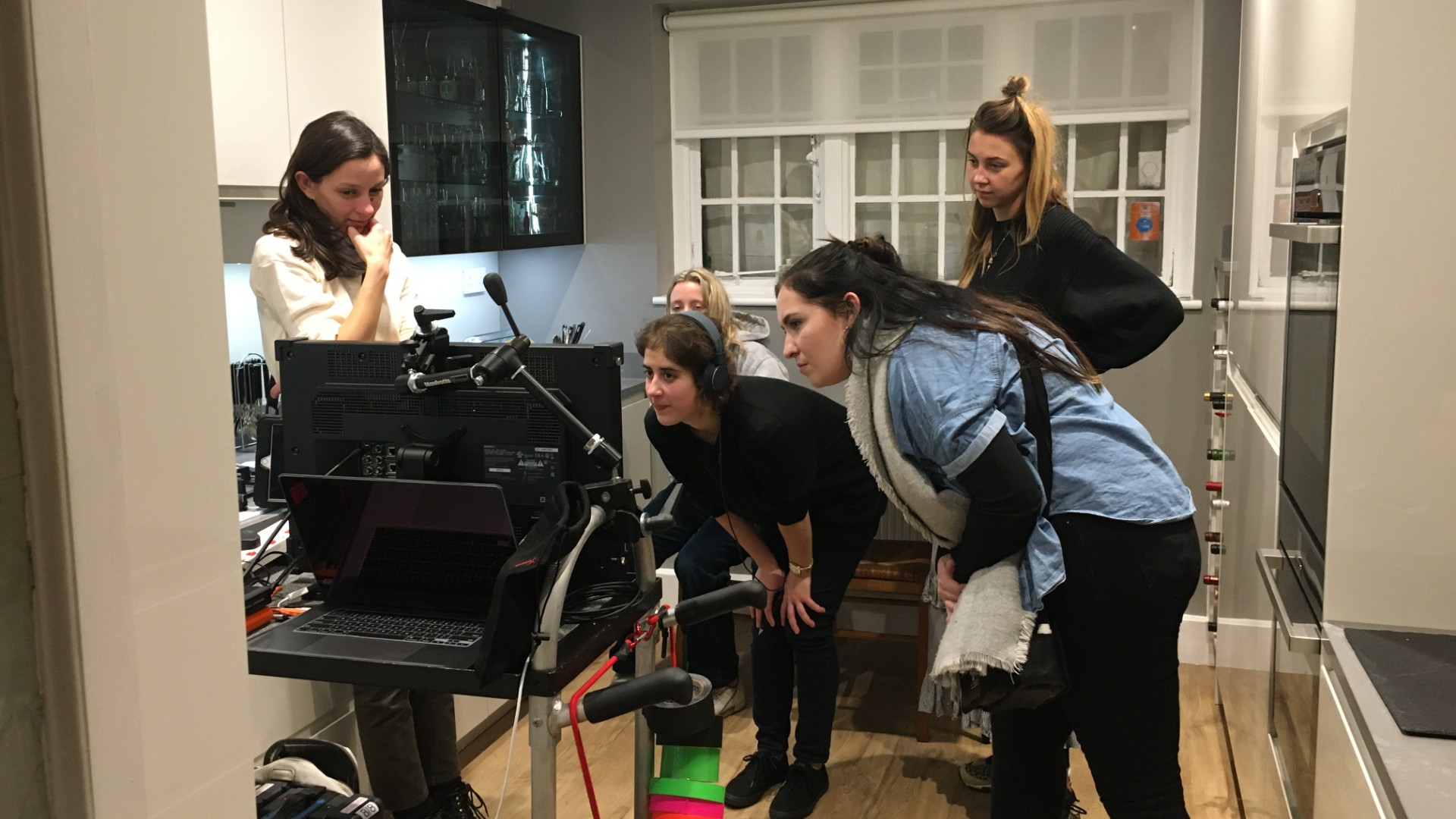 While taking time out of her busy schedule wrapping up her most recent short ‘PMS‘ and developing her debut feature film ‘Mother Nature‘ Ana was kind enough to answer some questions about her time as a Script Supervisor.

If you’re a writer, producer, director, or involved in post-production and want to better understand how professional productions work and the involvement of Script Supervisors then this is the article for you.

I don’t believe we’ve met in person but we seem to have mutual friends in common through the 2019 BAFTA Crew programme. So would you be willing to tell us a little about yourself and what it is that you do?

At the time, it used to be recommended because you get to learn a lot from Directors and the script. I really enjoyed it and rapidly started investing more in the script supervising aspect of the Film and TV Industry.

I started doing unpaid short films and along the way I assisted Jemima Thomas in the BBC/Amazon ‘Good Omens‘ and script supervised the iFeature ‘Perfect’ 10. On the job, I learned a lot about script structure and dialogue and how the script translates into screen action which has helped me develop my debut feature film ‘Mother Nature’, currently at script stage.

Well, congratulations on your success. It seems you’ve used the script supervisor position to broaden your skill-set as a director which is interesting to see.

But for the curious among us could you explain what exactly script supervisors do and how screenplays are used in the role?

Ana: The Script Supervisor comes into pre-production to breakdown the script which is a document that will be shared with all the heads of department after being approved by the Director.

We read it so many times that we almost memorize it. We know which characters, props, clothes, makeup (including stage of a wound) the action requires to tell the story in each scene as well as time of day, year and seasons. This will guide, not only the Director, but also the Cinematographer, Production Designer, Hair and Makeup and Wardrobe.

Because Film and TV are more often than not shot non-sequentially, this is important information to have in the breakdown so you can guide everyone when shooting a new scene. Every detail that the Writer puts on the page will be on this breakdown. It is up to the Director to let the Script Supervisor know if they will change or remove something, but what the writer writes is what goes on the master breakdown.

The least detail you make, the more space you allow departments to put their vision into the film, which is a good thing; although if the Writer wants to set a clear tone on the film for some reason, they can do so by being more specific with details on the page.

In pre-production, the Script Supervisor will also time the script. This means that we estimate how long the action will take when played out on screen. If a Writer specifies that a character’s trait is to drag his/her speech, then a one page monologue will take much longer than a character that is under the influence of speed, for example. These are also details from the Writer that will be taken into consideration by the Script Supervisor when telling production how long the script really is.

A single page can be broken down into eighths to make timing more precise.

This is why consistent formatting is important across the industry.

The script and the breakdowns will be the Script Supervisor’s bibles during the whole duration of production where more documents are produced from the script. Timings will be re-counted and the script pages will be split in 1/8’s of a page to help production understand how much of the script has been shot and how much is missing. If lines change, the Script Supervisor keeps track of this and sometimes, if the Writer is on set, they will confirm if the new lines still match the character or not.

Ultimately, the Script Supervisor’s job is to make sure the film has continuity: character behaviour, speech, wardrobe and makeup to guarantee the script’s coherence so the audience can focus on the story development, which protects the Writer and the Director’s visions.

How a Script Supervisor marks a screenplay

Every vertical line is numbered and indicates a different shot. This is often referred to as a “slate” number.

You may know the slate as a clapperboard.

The length of the lines determines how much of the script the shot covers with colour being a way of grouping shots.

This can help in understanding if there’s been enough “coverage” so there’s enough to edit in post-production.

But I’m curious to know: How has it helped you as a director and what do you think are the most important lessons you’ve picked up from being a script supervisor?

Ana: There are so many! Being a Script Supervisor really improved my craft as a Director. Directors rarely get to see fellow colleagues in action and I not only get to do that, but I get to help them achieve their vision which is a privilege. I learn what works and what doesn’t work from script to screen by witnessing the thought process of other Directors. Very often, my expectations are challenged. Maybe a scene wasn’t particularly amazing on the page but when it’s brought to life by the performance, it really changes. This is a very valuable experience.

Being a Script Supervisor also gave me a vast knowledge of coverage. I am faster at making decisions because I know what cuts and what doesn’t better. It also helped me understand what the crew goes through and what they need from a Director to guide them. Very often crew questions are muffled for practicality and speed on set, but by being a below the line crew member, you’re able to have honest conversations with other roles and have full insight on what they need to do a good job.

Because I’m Director myself I’m very respectful of what the Director needs from me on set. If they need peace and quiet, you should respect that and if they want creative input, then we can have back and forth conversations which are very dynamic. This has made me learn about the several potential visions from page to screen – how I would envision the script and how the Director next to me sees it is a fascinating learning process which provides confidence in your own vision as a Director.

You must have read quite a few scripts so what would you say are some of the worst habits that screenwriters have when writing?

Ana: Yes, I’ve read many many scripts. I guess there are scripts that are more structurally practical to work with than others, which facilitate life on set.

I think the three things that are difficult to work with when they aren’t well written are:

What advice would you give to anyone who wants to explore being a script supervisor. Are there any resources (books, courses, videos) that you recommend?

Ana: There are many ways to explore Script Supervision. Personally, I would recommend shadowing an experienced Script Supervisor on set for a few days and reading Beyond Continuity: Script Supervision for the Modern Filmmaker by Mary Cybulski. It is also extremely important that you learn the basics of editing if you want to become a Script Supervisor; in the end of the day, you’re making sure that the footage can be cut.

And finally is there anything you’re working on that you might want to let people know about?

Ana: I’m currently about to wrap post production on my new short film PMS; a comedy that brought together BFI Network x BAFTA Crew members and talented friends that I met whilst working as a Script Supervisor: https://www.anapio.com/post/pms-a-comedy-short-film

Thank you for your time.

As well as the above website (www.anapio.com) Ana can also be found over at Directors UK: https://directors.uk.com/users/8309